To find or locate a Veteran who is inscribed on the Memorial Wall please click on one of the following:

"Freedom is not free" 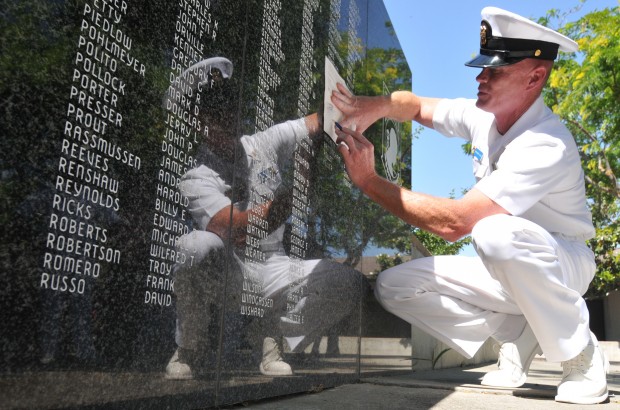 With these additions, 794 names are now etched in granite on the wall. The names on the monument represent sacrifices that are never forgotten — servicemen and women who have been killed during active service. “Today, less than 1 percent of the United States’ population serves in the armed forces,” said Capt. Mark Black, commander of Strike Fighter Wing of the U.S. Pacific Fleet. “You always hear the adage: Freedom is not free. Somebody has to pay the price. All of these people you see on this wall — not only did they pay the price of serving, they also paid the price ultimately with their lives. And it needs to be recognized.” Black and other officials from the Naval Air Station Lemoore, as well as local public safety personnel, joined local veterans and family members in an emotional ceremony.

As pleasant as the sunny spring morning was, faces were somber and the mood poignant. Messages of remembrance were punctuated by silence, the sounds of trees rustling in the wind and intermittent flapping of military flags flown above the memorial. Each name was read aloud by Kings County’s veterans services officer Joe Wright. Each serviceman met his demise as a result of different circumstances, and many are still vivid memories for families and comrades left behind. Among the nine names honored Monday were Lt. Matthew Lowe and Lt. Nathan Williams, two NASL pilots killed last April in a tragic mishap during a training flight. Members of the Strike Fighter Squadron VFA-122 stood in formation at the ceremony to signify their mourning. The service bore all the markers of military decorum: a color guard firing off a three-gun salute and a bugler playing Taps as the event wound down.

Joe Alcoser of Hanford choked up as he reflected on the ceremony. Words could hardly describe how he feels, said Alcoser, a 77-year-old Army veteran who served in Germany during the Cold War.
Standing by the memorial were family members of Army Sgt. Joshua Soto, an Avenal High School graduate who was killed in combat on June 19, 2009. He was in his third deployment to Iraq.

Rosa Sierra and Carol Maldonado became emotional as they spoke of their beloved nephew, who was 25 when he died. Soto was awarded two Purple Hearts and one bronze medal. “It wasn’t easy for us,” said Sierra. “But we knew that he died doing what he believed in — serving the country.” Soto is remembered for his smile and larger-than-life spirit, Maldonado said. After three years, the pain is still raw for the family. Soto’s father and grandmother could not attend the ceremony because it was too emotional for them, she said. But Sierra and Maldonado said it was gratifying to know the sacrifices made by their nephew and other servicemen and women will not be forgotten in Kings County.

“We’re not the only family that is missing our loved ones.,” Maldonado said. “...My heart goes out to all of them ... We’re honored that they acknowledged him, and we’re very thankful for people who have served their country and given their lives to the country.”

During Monday’s ceremony, those attending also observed a moment of silence to honor the late Case Droogh, a local dairyman who was instrumental in the construction of the memorial. Droogh died last November. 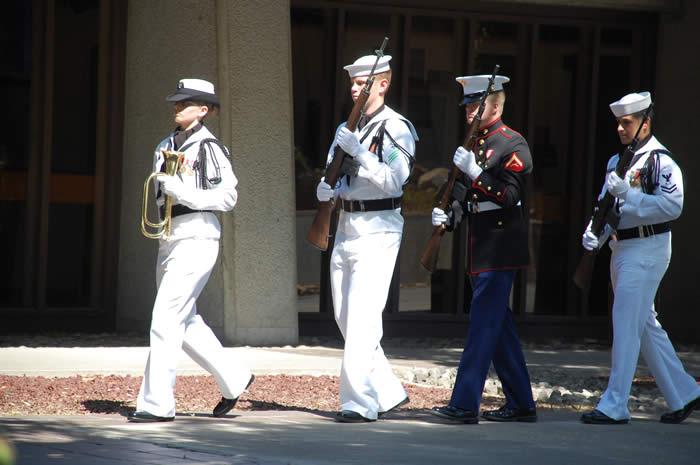