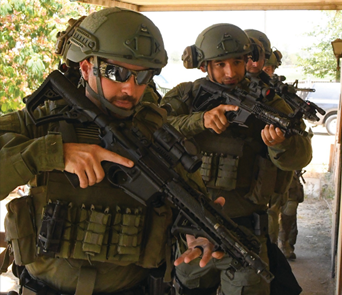 In response to ever increasing criminal sophistication and violence, the Kings County Sheriff's Department created its Special Weapons and Tactics Team in 1986.

The formation of a special purpose tactical squad evolves from the concept that a team can more effectively and safely be employed in an enforcement confrontation than a larger or lesser trained group of people.

A tactical squad will consist of a group of highly motivated, well conditioned, specially equipped individuals trained to function in tactical oneness under a variety of situations. It is believed that in confronting a criminal with such a superior force any inclination to violent resistance will be discouraged.

The objective of the SWAT team is to utilize the minimum amount of force necessary to achieve a successful conclusion of an operation, with minimum hazard to citizens, property, and deputies involved. SWAT’S MISSION IS TO SAVE LIVES.

SWAT is a support element of the department and will be utilized when a situation requires the use of their specialized capabilities. SWAT will implement and carry out appropriate tactics in situations that call for law enforcement intervention.

The following are examples of situations that, by their nature, require the deployment of special weapons and tactics: